Caspar the Caterpillar was born on a tall plant in the middle of a pond. His mother had laid an egg there, it seemed like a good spot for her child. 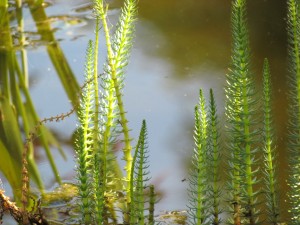 Caspar really likes the pond, it had beautiful water lilies, 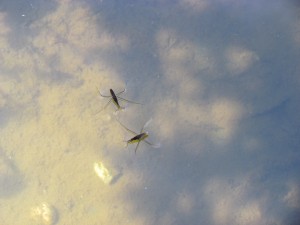 and even colourful dragonflies.

But he was suddenly attacked on his backside by a silly little Water Strider who thought he could eat him all up!

Caspar jumped and wiggled about so much the Water Strider went off in a huff, claiming Caspar was too tough to eat anyway!

Caspar carried on his journey, he really must find some dirt! 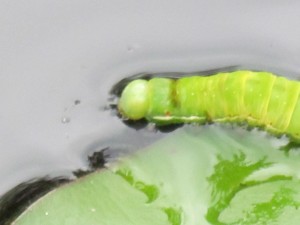 But then he thought,’Maybe there is some dirt down there. I’d better look!

Nothing but goldfish down there. Goldfish! Oh my, they’ll eat me all up! I’d better get back on the lily pad. 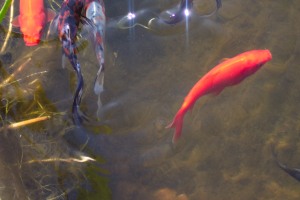 But Caspar was a brave little caterpillar . He had to find that dirt so he started off again 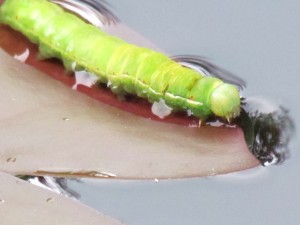 But the pond was so big!

And the fish were still there just waiting for a big juicy caterpillar to fall in the water.

All he could do was run round and round the lily pad looking for a way to shore. But it was too far! What was going to happen to him now! If only his mother had picked a land plant to lay her egg on, he wouldn’t be in this mess.

Suddenly a long black pole with a net on the end reached out to him and scooped him up off the lily pad. And the next thing he knew he was dropped into a pot full of….dirt! Caspar just dove right down into that nice warm soil, curled himself around  and sighed with happiness. At last, he could become a pupae and grow up into a moth inside his tight little skin. 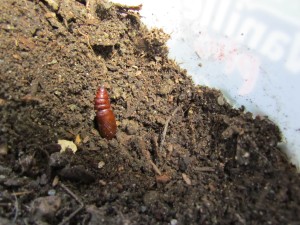 Bernice, or "Bunny" to her friends and family, is originally from Toronto. Born in 1934, to an actress mother and an artist father who told her sister and her delightfully silly stories on their walks to the museum and art gallery. She came to BC in 1962 with her husband, George, and four small daughters, travelling across country, (with many breakdowns) in an old Volkswagen van.

“Carrying us on her words, so deftly laid down, Bernice casts her writing spell, taking us to a place of misadventure and mystery. Magic and mischief are in the air!”

Thanks to our Publisher