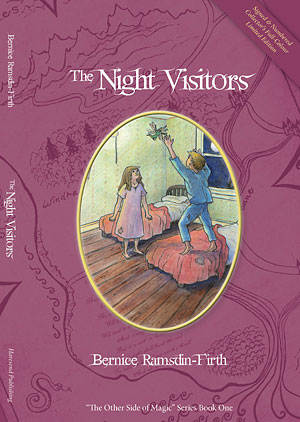 This story just happens to be in Canada, where there is a long tradition of belief in the Faerie, especially in the eastern parts of the country. Many First Nations have their stories of the ‘little people’ and tales of sightings abound south of the border as well. We often think of the Faerie as something from the past, living on the fringes of civilization, but we must not discount these stories, for the Faeriekind  must be given their due; they are, after all, part of our heritage.

“Lyle, wake up!” Lynn whispered. “What’s that funny noise?” Lyle shifted around in his bed, then lay flat and squinted through the window at the moon.

“Shhh! It’s prob’ly just a fly.” Lyle yawned noisily and, blowing a strand of hair out of his eyes, squeezed them shut.

“Don’t make so much noise! Be quiet!” Lynn was sure the sound was much too loud for a fly…’

Follow the exciting adventures of the twins, Lynn and Lyle, who befriend a group of ragged and hungry Faerie living nearby. While attempting to avoid the attention of their bad-tempered foster parent, Mrs. Bagge, and her bullying nephew, they find a way, aided by their French Canadian friend Mr. Peter and three helpful animal companions, to send the little people back to their long lost home in Lolibran. But their good intentions throw them into terrible danger—and what they think is an ending, is only just the beginning.

You can even download Chapter 1 to whet your appetite!

“Carrying us on her words, so deftly laid down, Bernice casts her writing spell, taking us to a place of misadventure and mystery. Magic and mischief are in the air!”
~ Constance Kurtenbach, author In My Mother’s Garden (2010), contributor The Oyster Speaks (2005)

“This is fast-paced tale of adventure, fantasy and redemption drew me into its world of magic from the very first page. It left me wanting more.”
~ Liz Maxwell Forbes— Growing up Weird (2017) Contributor— Somebody’s Child: Stories About Adoption (2011) Contributor—The Oyster Speaks. 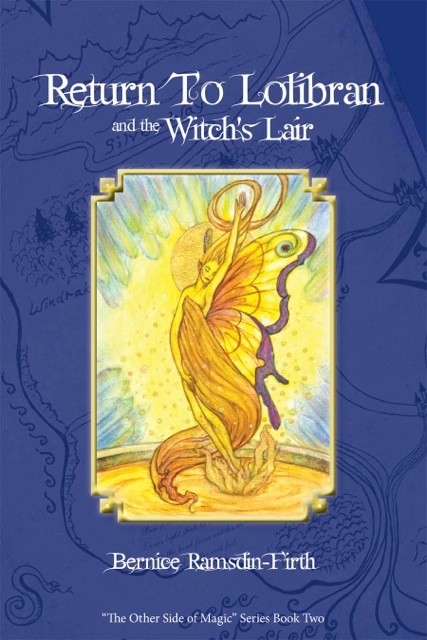 ‘Pulled through the Rainbow’s arc until they  felt like rubber bands ready to snap at any moment, their heads entered Lolibran while their feet were still away out over the sea. This, for these Earthlings, was a frightening and at the same time, exhilarating experience. Yet the whole journey was so swift that what had seemed to them like hours was over in an instant. Time had s..t…r….e…..t……c…….h………e………d along with their bodies.’

Lolibran, the Faerie’s traditional homeland, has pulled the twins into the adventure of their lives. Travel Lynn and Lyle, their mentor Mr. Peter, their three animal companions and Rob, the children’s bullying nemesis, as the Faerie attempt to overthrow the cannibal witch Solvieg and fight to set their devastated land free.

But Rob sets out to betray them all, only to find he must make a choice between honour or death— his own.

Out of the Frying Pan 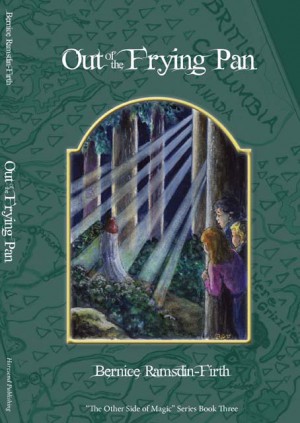 Out of the Frying Pan

‘Lyle was first to open his eyes. Looking up he saw a light so brilliant he closed them again. He lay for a while trying to think of who he was and where he was, and then he dozed off again. As he was sliding deeper into sleep an odd chuffing sound interfered with his dreams, a sound he had not heard before, and his eyes popped open again. Now fully awake, he sat up,  to find himself staring down the slope into the face of a large—a very large—grizzly bear. At Lyle’s movement the bear rose to his full height the chuffing becoming a low growl.’

After a hazardous return from Lolibran, Mr. Peter and his little family, twins Lynne and Lyle, their now friend Rob and the the tiny Faerie Riquet, find themselves once again in deadly peril. Is Solvieg not dead after all, but transformed into their new acquaintance, Elvira Pinkley? And will the witch try once more to exact her revenge?

‘Adventures are all very well, Mr. Peter mused, but this was getting a bit much; at sixty five he was hoping for a quieter life. Ah well, it is June, the sun is shining, and once they get out of the city the drive east will give them all a chance to relax and enjoy the view. Surely, after their narrow escape, they have left their nemesis— Solvieg, the cannibal witch—far behind them. Not!’

But after fleeing across the country, only one step ahead the malevolent witch Solvieg, Mr. Peter disappears. With their animal companions helping to protect them, Lynn and Lyle and Rob and Riquet decide to carry on. While attempting to stay out of Solvieg’s clutches, they face a harrowing and, at times, deadly journey.

Bernice, or "Bunny" to her friends and family, is originally from Toronto. Born in 1934, to an actress mother and an artist father who told her sister and her delightfully silly stories on their walks to the museum and art gallery. She came to BC in 1962 with her husband, George, and four small daughters, travelling across country, (with many breakdowns) in an old Volkswagen van.

“Carrying us on her words, so deftly laid down, Bernice casts her writing spell, taking us to a place of misadventure and mystery. Magic and mischief are in the air!”

Thanks to our Publisher